To attend the event, register at the following link:

Question Collection Link before the seminar

For anyone who is not convenient to fill the above form, they can send their questions directly to Shuangyang at shuangyang.li@unsw.edu.au. Ronny Hadani received the Ph.D. degree in Pure Mathematics from Tel-Aviv University. His expertise is in representation theory and harmonic analysis, with applications to signal processing. He is the mathematical visionary who, together with CEO Shlomo Rakib, created Cohere’s ground-breaking Orthogonal Time Frequency and Space (OTFS™) wireless modulation scheme and founded the company. He leads Cohere’s research into the capabilities of OTFS and other advanced wireless technologies and how they can enable the next generation of wireless services. In addition to being Cohere’s Chief Scientific Officer, Ronny continues to serve as an associate professor of mathematics at the University of Texas at Austin, a position he held prior to co-founding Cohere. 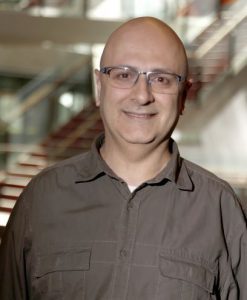 Emanuele Viterbo received the Ph.D. degree in electrical engineering from the Politecnico di Torino, Torino, Italy, in 1995. He is currently a Professor with the ECSE Department and the Associate Dean of graduate research with Monash University, Melbourne, Australia. From 1995 to1997, he held a Post-Doctoral position at the Dipartimento di Elettronica, Politecnico di Torino. From 1997 to 1998, he was a Post-Doctoral Research Fellow of the Information Sciences Research Center, AT&T Research, Florham Park, NJ, USA. From 1998 to 2005, he was an Assistant Professor and then Associate Professor with the Dipartimento di Elettronica, Politecnico di Torino. From 2006 to 2009, he was a Full Professor with the DEIS, University of Calabria, Italy. He has been an ISI highly-cited researcher since 2009. His main research interests include in lattice codes for the Gaussian and fading channels, algebraic coding theory, algebraic space-time coding, digital terrestrial television broadcasting, digital magnetic recording, and irregular sampling. He is an Associate Editor of IEEE Transactions on Information Theory. He is also the Guest Editor of IEEE Journal of Selected Topics in Signal Processing with the Special Issue on Managing Complexity in Multiuser MIMO Systems. Mohamed-Slim Alouini was born in Tunis, Tunisia. He received the Ph.D. degree in Electrical Engineering from the Califonia Institute of Technology (Caltech) in 1998. He served as a faculty member at the University of Minnesota then in the Texas A&M University at Qatar before joining in 2009 the King Abdullah University of Science and Technology (KAUST) where he is now a Distinguished Professor of Electrical  and Computer Engineering. Prof. Alouini is a Fellow of the IEEE and of the OSA. He is currently particularly interested in addressing  the technical challenges associated with the uneven distribution, access to, and use of information and communication  technologies in far-flung, rural, low-density populations, low-income, and/or hard-to reach areas. Ullrich Pfeiffer received the Ph.D. degree in physics from the University of Heidelberg, Germany, in 1999. From 2001 to 2006 he was with the IBM T.J. Watson Research Center working on RF circuit design for 60GHz communication systems. In 2007 he received an European Young Investigator Award and moved to the University of Siegen, Germany. Since 2008 he holds the High-frequency and Communication Technology chair at the University of Wuppertal, Germany. Prof. Pfeiffer is an IEEE Fellow. He was the co-recipient of the 2004 and 2006 Lewis Winner Award, and the 2012 and 2018 Jan Van Vessem Award at the IEEE Int. Solid-State Circuit Conference. He was a co-recipient of the 2010 EuMC and the 2017 MTT Microwave Prize. In 2021, he received an ERC Advanced grant. He has authored and co-authored 200+ publications and has been principal inventor and co-inventor of 10+ US and international issued patents related to mmWave/THz communication circuits and sensors.